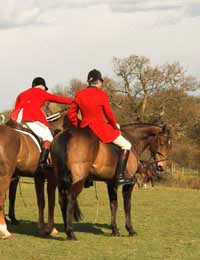 Hunting (especially fox hunting) is a controversial issue. On the one hand animal rights groups protest that maiming and killing defenceless animals is inhumane. On the other hand, hunters argue that it is an essential part of traditional rural life, and that banning it altogether will collapse the infrastructure of life in the country. Here, we outline the arguments in favour of hunting.

Fox hunting became popular in the 18th century. Before that, hunting hares, wild deer and wild boars were the main blood sports in Britain, but the extinction of the wild boars and the almost extinction of wild deer turned attention to foxes instead.

Hunters often argue that protesters don’t have any idea of what a hunt actually involves, even going as far as to say they only turn up after the hunt has finished. They suggest that those who are against hunting should take the time to understand the exact nature of hunting before they air their views.

According the League Against Cruel Sports (LACS), hunting provides jobs for around 750 people. Hunters argue that these people would be unemployed if hunting was banned. It’s not a huge amount in the grand scheme of UK employment, but it would undoubtedly be a big blow to those involved, who would obviously then need to find alternative ways to support themselves and their families.

The British Field Sports Society (BFSS) suggest that more than 750 would be out of a job, but not of all these would be strictly unemployed, as jobs like horse riding and providing riding equipment and services would still be in demand.

Pro-hunters claim that hunting and other blood sports are inevitable because of our biological make-up. To them, death and suffering are an unavoidable part of life, and the foxes would die anyway.

Hunters claim that if you eat meat, you have no right to offer arguments against hunting. As far as they are concerned, meat eaters who oppose hunting are hypocritical. There can be no doubt that animals are killed for meat, but not all forms of blood sport involve the hunted animals dying. Wearing leather and other materials that are made from animals can also be seen as hypocritical.

Pro-hunters reckon that foxes and other hunted animals don’t actually suffer during a hunt.

Hunters argue that foxes are a nuisance and run amok in rural areas, killing and maiming large numbers of chicken and lamb. This is one of their arguments for why fox hunting in particular is so common in the countryside.

“A Hunting Ban Will be Impossible and Impractical”

The majority of the police are not trained to be able to police hunts, and so would not be in a position to make sure that no hunts take place anywhere in the UK.