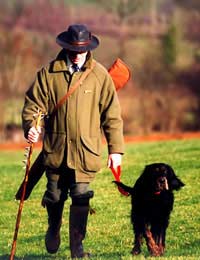 Grouse shooting is a popular shooting sport in the UK. Most game hunters participate in the rural sport for pleasure but there are other reasons for its continued popularity.

Why is grouse shooting popular?

Although game and grouse shooting is mostly done for fun, game birds like grouse are also hunted for food, as they can be eaten fresh and are healthy. Grouse is protein-rich food and contains little fat. Being a natural food source, it has no artificial preservatives or chemicals. All game birds that are shot will be gathered together and sold on, usually to a game dealer or butcher, so most of the birds will end up being eaten, regardless of whether that was the initial intention when hunting them.

Because they are relatively rare nowadays, they are placed in high esteem. Hunters who earn money as a direct result of game and grouse shooting aren't legally required to hand over any of their income in taxes. A lot of this extra income is used to buy conservation management and to continue to employ people in remote rural areas.

When shooting parties (often from abroad) come to stay in one of the rural areas in which grouse shooting often takes place, they will probably stay in a local hotel, which boosts their profits. This often extends to other local businesses like restaurants and shops, so grouse shooting can have definite benefits for the local area.

As you've probably gathered, grouse shooting involves shooting game birds. This is mostly done for fun. The birds are driven above the shooters by beaters, so that they can be easily targeted by the guns, which are located in butts ( a shooting hide that is hidden behind a turf or stone wall). Alternatively, grouse shooting can also involve the birds being 'flushed' by dogs. See our article on 'Gundogs and Hunting Dogs' for more information on this.

Grouse can fly at speeds of up to 80 miles per hour, which makes them challenging to shoot.

The season officially starts on August 12th of every year. It lasts until November 30th in Northern Ireland, and December 10th in England, Scotland and Wales. During the season, it's common for shooters to make for the Scottish and Northern Irish moors. Many make the trip from across the world, as the grouse in these areas are found in their natural habitat and haven't been reared artificially. Red grouse usually attract the most attention, and they are only found in the UK.

Strong etiquette rules prevail in grouse shooting. These are designed to encourage safe and responsible shooting. Most of these are common-sense ground rules that apply to shooting of any type. Grouse shooters should already be aware of these, as game hunting is one of the most complex shooting sports.