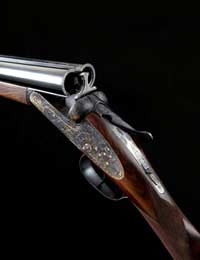 If you're new to shooting, you'll need to be familiar with the shooting rules and regulations. Shooting in the UK is quite a traditional sport with etiquette guidelines that all participants are expected to follow.

Many of the shooting rules and regulations in the UK have emerged as a result of safety considerations. Because of this, the UK has fewer shooting accidents than a lot of other countries (as long as all shooters are aware of them and make a conscious effort to stick to them whenever they're involved in shooting).

One of the most important safety rules centres on loaded guns. It's important that you never point a loaded gun in the direction of another person, even if you don't intend to shoot. The same is true of an unloaded gun as it can still be highly dangerous. Guns should be unloaded for the majority of the time, except for just before you're ready to shoot. Our article on 'Shooting Safety' discusses safety in more detail.

The Clay Pigeon Shooting Association (CPSA) requires you to be a CPSA member to enter registered events and shooting competitions. If you're not a CPSA member, events and competitions are also open to members of shooting clubs that are affiliated with the CPSA or anyone who has purchased a CPSA Day Pass for that particular day.

For shooting competitions, you're allowed to use club facilities for practice purposes in the days leading up to the competition. However, practising prior to a tiebreak isn't allowed and results in disqualification from the competition.

The CPSA require shotguns to have a bore of no more than twelve, which is the equivalent of a diameter of 0.729 inches. Barrel lengths can be anything from 26 inches to 32 inches.

As hunting game is still a significant part of shooting as a rural sport, respecting your quarry (game that you've shot) is a golden rule of shooting and all efforts should be made to make sure that quarries don't suffer when they are being hunted.

As shooting is one of the traditional rural sports in the UK, all shooters are expected to follow a series of rules and regulations, many of which make the sport much safer for everyone involved in it. A lot of these rules are based on etiquette guidelines. Although they may seem incredibly obvious points that experienced shooters will know inside out, they are often overlooked by many, and are not immediately obvious to new shooters. The rules and regulations discussed above are only a small number of the many ones that you need to know. You can do some research on the internet, but it will be far more beneficial if you seek advice from your local shooting club or from other shooters, and get it straight from the horse's mouth (so to speak!).