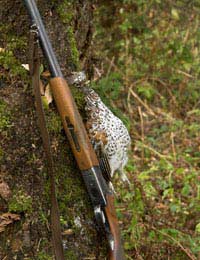 As a shooter, you need to be aware of when the closed season is in your discipline, particularly if you have more than one shooting discipline to think about (for example, if you're a game hunter and a wildfowl hunter simultaneously). It can be easy to lose track, and this can land you in a lot of hot water. Here is our guide to the open and closed seasons for some of the main shooting types.

The grouse shooting season opens on August 12th. In Northern Ireland, November 30th is the close of the season, but it doesn't end until December 10th in the rest of the UK.

For other game birds, there are individual shooting seasons that you need to be aware of.

It's essential to be clued-up on the shooting season(s) for the type of game that you're going to be shooting, as failing to stick to them can easily land you in trouble with the law.

Target Shooting
Share Your Story, Join the Discussion or Seek Advice..
[Add a Comment]
Are you allowed to shoot pheasant on the 1st of February? Or does it stop at midnight on the 31st?
Colin - 29-Jan-20 @ 9:55 AM
Hi i live on a estate in the country side, they have many shoots going on and shot keeps coming down on us while ion the garden ,is there anything we can do?
Nippy - 13-Sep-19 @ 7:16 PM
Is it illegal to shoot on a Sunday in scotland?
Nana - 11-Nov-18 @ 3:23 PM
Today is 1st September and there has been a pheasant shoot today alongside our horse field. The horses were terrified and we were given no warning either. I thought it was illegal to shoot in the closed season ie before 1st October. The birds are tiny too so cant be much sport.
suegodby - 1-Sep-18 @ 2:08 PM
rita , if you don't agree with country life and its sport , then why move there in the first place , I f he didn't shout and control what is about there would be no pheasants and hence all food prices would escalate . and your kids could be playing with rats and lots of other unwanted pests,
T H - 7-Sep-17 @ 2:11 PM
We live next to a farm where they have a shoot, the last two weekends we have had birds crashing into our windows, one survived but this morning the second one wasn't so lucky, are there rules about how close can be next to a house ?
Bags - 23-Jan-16 @ 10:56 PM
@DB1983. Thanks, we've corrected the article now.
RuralSports - 2-Jun-15 @ 11:34 AM
The information displayed above is wrong - hunting of curlew was banned under the Wildlife and Natural Environment Act (Northern Ireland) 2011.
DB1983 - 30-May-15 @ 3:23 PM
I have permission from a farmer to shoot pigeon & crows on his land but one of the fields is close to a small village of about 25 houses.I set up my hide as far away from the nearest house as possible about 500yds at least but because of the wind direction a man from the village came over to my hide shouting abuse and threatening to call the police saying I was far too close to the village and the noise was scaring his dogs. The farmer says shoot away it doesn't bother him. What aremy rights if the police are called
millerfish - 31-Aug-14 @ 9:04 PM
I,live in a rural location,with no other house within a quarter of a mile, last year someone rented from the landowner some land close to and around our property,and bread pheasants and ducks so they can organise shoots. I'v had this house for about 18 years and the farmer did shooting a couple of years ago,which we put up with, but the person that is doing it now is breeding and killing these birds far to near our property,although to be fair he tells us when he shoots, but we have a full view of the killing, we also have grandchildren who are upset over this, he burns the straw and the birds that have died, which we can smell in the house ( this has happened three times)but he said he wouldn't do it again when my husband complained. We must have had fifty or more pheasants in our garden roasting on our garden furnitureand our dog. Chases and kills them,he's caught about a dozen,is there anyone that can tell me that I have any rights to not having this so called sport so near my house? Rita
Rita - 3-Feb-13 @ 11:23 AM
I have taken the trouble to speak with the manager of a shoot that we have to put up with. And, despite continual problems with shot being fired at our property - in one case drawing blood - the shoot manager and land owner continue to allow the shoot to fire in our direction from October to the beginning of February. Basically, ems, they can shoot where they want, and how they want and they don't have to care how that affects neighbours. You can try talking to them but, in the end, they're the ones with the guns and dogs.
JE Hoyes - 1-Feb-13 @ 8:26 AM
First, take the trouble to find out who runs the shoot and arrange to meet with them to express your concerns.There is no legally defined distance for a pheasant shoot to be away from a house, and I suspect there is little in law you can do to prevent people going about what seems to be an entirely legal business.You may be unfortunate enough for the odd wounded pheasant to fall onto your property (I have some difficulty with the claim this happens "often").But I simply do not believe this would be given as a reason for not allowing fostering.
Michael Wilson - 29-Apr-11 @ 10:38 AM
I am unable to find what distance a pheasant shoot should lawfully be away from a house.We live up a private lane and the shoots are held in the field at the front of the house.Birds often drop into our garden usually injured and squirming around on the ground. We have just been turned down for fostering due to what could be classed as a danger to children
ems - 18-Mar-11 @ 11:41 AM
Title:
(never shown)
Firstname:
(never shown)
Surname:
(never shown)
Email:
(never shown)
Nickname:
(shown)
Comment:
Validate: