Home > Fishing > Getting Started in Fishing 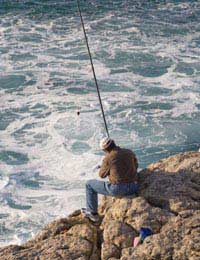 Casting your fishing rod is one the fundamental skills that you'll need to learn. Like most other things, it's a case of perfecting your technique through practice, but there are a few basic steps to master:

Tying knots in fishing line is a basic skill, but you need to get it right. Many people don't wet the line before they pull it tight. This creates friction, which weakens the line and makes it more likely to break or snap. Three or four different types of knots will usually be the maximum that you'll need to know. These will depend on the type of fishing that you do.

There are a few knots that are worth learning:

It sounds easy, but there is a certain skill to safely unhooking a fish once it's been caught. It's important to reel the fish in quickly so that its chance to struggle is limited. At the same time, you need to keep it in the water for as long as possible. The quickest way to remove a hook is to get hold of the shank (the straight part) and turn the hook upside down. The fish will hopefully slide off the hook easily, but if you can't remove the hook safely, cut the line as close as possible to the fish's mouth.

You won't get very far without the right equipment! See our article on 'Fishing Equipment' for more information on choosing the right type of fishing gear.

Permits and licenses:A fishing rod license is mandatory, and failure to produce one if required can result in prosecution. Read our article on 'Getting A Permit and License' for information on acquiring both.

Once you’ve mastered the basics, you’re pretty much ready to go! Getting help and advice from like-minded anglers can be a real benefit. Many angling clubs have members with a wide range of experience, from beginners to those with decades of fishing under their belt, and this makes them particularly beneficial. See our article on 'Angling Clubs' for more details on finding and joining one.

Fishing Safety Tips
Share Your Story, Join the Discussion or Seek Advice..
All this is fine, but to start out you only need a rod and reel, and a fishing licence. Go down with a friend who's more experienced and have them show you the basics. There's no point in getting too fancy to start out, as you might not enjoy it (in fact, borrow a rod and reel for your first couple of attempts, if you can, so you've not invested anything). And make sure you leave all your impatience at home, and go when the weather's good.
Anthony - 23-Jun-12 @ 6:22 AM
Title:
(never shown)
Firstname:
(never shown)
Surname:
(never shown)
Email:
(never shown)
Nickname:
(shown)
Comment:
Validate: