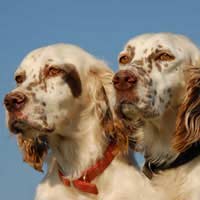 Gun dogs usually fall into one of several breeds:

Other Types of Hunting Dog

Aside from gun dogs, there are several other types of hunting dog: hounds, terriers and curs.

Hounds generally fall into three sub-categories. Sighthounds are so-called because of their acute visual skills. They see their prey from some way away, and pursue them quickly. They are fast and quiet, which makes for a deadly combination! Whippets are an example of a sighthound. Scenthounds are scent-orientated. They often hunt in packs, and guide hunters to their prey. Lurchers are a cross between a scenthound and a working dog breed.

Terriers are almost always used to hunt other mammals. They seek out prey through their living environment and pounce. Many of their victims are common pests. For example, Fell Terriers are used to hunt badgers, but this is not always legal.

Curs are similar to terriers, but often hunt larger game. They can often be a mixture of breeds.

Gun dogs and other hunting dogs are used for a variety of hunting types. Different breeds have different skills and abilities, which make them ideally suited to a particular form of hunting.