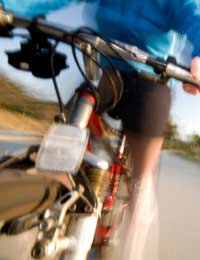 Downhill mountain bike racing usually takes the form of a time trial. Instead of a massed start, competitors begin their race at different intervals. The interval between competitors setting off can range from thirty seconds to several minutes. As the races take place on downhill terrain, it is usually quicker than cross country mountain biking, and rough terrain can make it more physical. Because of this, the bikes need to be specialised in terms of the suspension and brake discs to cope with the often difficult conditions.

Also known as mountain cross biking (although they do differ slightly), this form of mountain biking has similarities with BMX racing. It involves four competitors racing against each other on the same course. Their times for completing the course are used to determine who goes through – the top half of the field progress through to the knock-out rounds.

Fitness plays a big part in marathon mountain biking. The typical distance covered is around 50 miles, although it may be more or less than this. In most cases, there will be a massed start in which all of the competitors start together (similar to a running marathon) and the winner is the first rider over the finish point.