Cycling Through all Britain's Counties: A Case Study 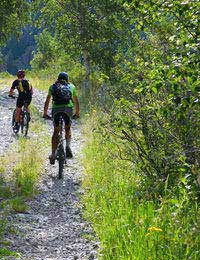 In the Summer of 2008, Joe Egerton, a student from London, set himself and two other friends the challenge of cycling through every county in England. Setting off at eight seconds past eight on the eighth day of the eighth month, 2008, the trip took three and a half week in total. We tracked down Joe to learn more about his rural sporting adventure.

So, first things first, what equipment did you take?

We were keen to travel lightly, so we made a rule that everything we packed had to fit in our pannier racks. We took a two man tent between three of us, we each took a sleeping bag and roll mat. We packed camping gas, cutlery and cooking equipment. Bike-wise, we took a pump, a puncture repair kit, a chain broker, spare spokes and spare inner tubes. We wore cycling shorts, cycling shoes and a waterproof and took a couple of changes of clothes. Crucially, our pannier bags were waterproof. Oh, and we took a map!

Where did you stay?

I’d say our nights were divided half and half between campsites and woodland. We did the ride for charity which meant some campsites offered us free accommodation. I regret not organising that all in advance, as I think we’d have had even more luck that way. One night we stayed in a creepy disused quarry; not much fun! A couple of times, we asked farmers for permission to stay in their fields. Everyone was very friendly. In Yorkshire, a walker came by and showed us a clearing of common land in the woods where people had obviously camped before. He also gave us some kindling and offered us food. If I was to do the trip again, I’d research in advance where common land could be found in each county.

What did you see?

It was fascinating to watch the physical landscape change as we travelled about the country. We began with the rolling hills of Cornwall and Devon and moved on to the flatter planes of Gloucestershire and Oxfordshire. Approaching the Malverns was amazing. We could see them from twenty miles away and spent most of the day watching them approach from our bikes. Getting to the top was an incredible feeling. Whilst we were camping, we saw deer in the woods. It was noisy at night; we heard owls and even the sound of creatures burrowing nearby.

Did the trip enhance or change your perception of the countryside?

Most of all, it made me realise how much of the country is still rural and made up of woodlands and hills. Villages and towns seemed few and far between.

How physically demanding was it? Did you train in advance?

We are all keen cyclists. We trained in advance and did a few practice runs with our tent and equipment in our pannier bags. I think it’s important to train like that. We took the trip at a leisurely speed of about fifteen miles a day. We’d eat lightly at lunch and either cook or treat ourselves to a large pub lunch in the evenings. Some publicans allowed us to camp in their pub gardens if we bought a meal.

Did it inspire you to cycle more?

Joe’s trip was clearly a memorable and rewarding experience, igniting his love for cycling and enhancing his interest in rural England. This summer, he’ll be cycling around the coast of Ireland. We wish him the very best of luck.